Based on an in-depth conversation with a source close to the proceedings, I am now able to explain the background and the economic impact of today’s big wireless patent announcement, a press release with the following set of headlines:

The announcement also quotes IPCom’s Managing Director, Bernhard Frohwitter, as saying that the patent holding firm, which acquired this patent (as well as more than 1,000 other patents) from wireless communications pioneer Robert Bosch GmbH, “will use the right awarded by the courts, likely resulting in HTC devices disappearing from shops during the crucial Christmas season”.I have uploaded the now-enforceable ruling of the Mannheim Regional Court (both the original German ruling and an English translation) to Scribd. Here’s the header (click to enlarge): 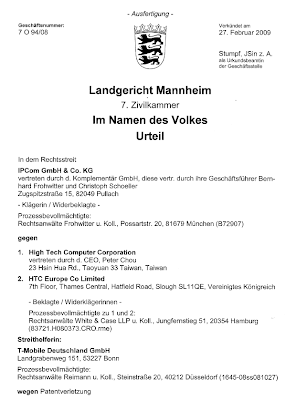 HTC withdrew an appeal against this ruling before the Karlsruhe Higher Regional Court that would otherwise have gone to trial this coming Monday (November 28, 2011). An appellate decision would have come down either right from the bench on Monday or not long after the hearing. The enforcement of the first-instance ruling was suspended only for the duration of the appeal, which is why it has now become immediately enforceable. HTC provides the following official explanation for this 11th-hour withdrawal:

HTC considers that the appeal had become redundant as the German Federal Patents Court had previously held the relevant claim of the patent to be invalid.